Since the game is originally played on paper, it has to be simple as that (which is a good thing). It is obviously a 2D game and it is designed to be rather a fast one. So let’s cut to the chase: 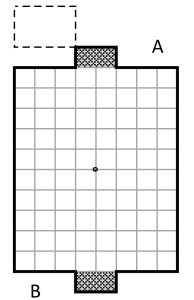 I. PLAY-FIELD. It is a 10×8 rectangle that consists of 80 little squares (capt. Obvious strikes again!).

As you can see in the picture, there are two more features that shift to your focus. The centre point of the field, where the game begins, and the “goal” fields that are on upper and lower side of the field, standing opposite each other. As you probably have guessed, the letter A is player 1 and the B is player 2 :) The primary goal of the game is for player A to score a “goal” into the goal-field of player B. And  how will he do this? Well, keep reading… 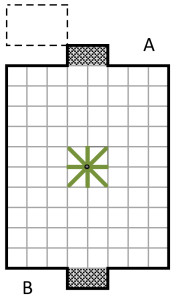 II. Movement rule no.1 means in theory, the possibility of moving simply in all directions, but, if not bumping (soon to be explained), you can only move within one square in one turn. This picture says it all, I hope :)

What you can see here, are basically 8 possible first moves of player A in the game. Player B starts his turn from the point, where player A has finished.

When Player is on turn, he must always make a move. 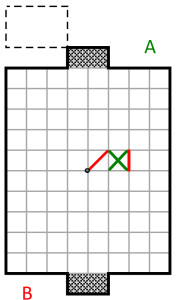 In this picture 4 moves are depicted:

Pay attention to the fact that every move has to be original, players cannot make the same move as their opponent. Pinpointing the obvious, that means you can not draw a line on top of your opponent’s line. Every line (move) must be in an area not used before. 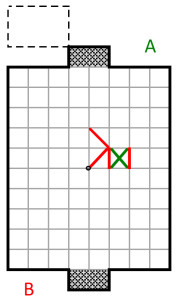 III. Movement rule no.2 – Bumping. Bumping, is a rule that makes sure player finishes his move in a point where no previous move has been made. OK, the theory of the game written down may not sound, well, understandable at first :) Have a look at the picture on the right. It is the same game just taken further by one single move:

Notice that Player B used the Bump rule to his advantage and moved twice. One inevitably bumps when hitting the wall.

Bumping is the fun part of the game :) especially, when bumping 10 or more times in row…

THAT IS ALL FOLKS!

These are the very few and very simple rules that make this game good to go and fun. You can win a game in two ways. Either you reach the opponents goal field and score, or you force him to a take a stand where his every move will force him to bump and there is no place to bump to :) This is what we call a bricked (trapped) opponent. 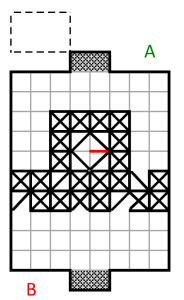 And to be visual again, on the left you are able to see that Player B won to Player A by bricking him. As you see, Player B finished his move legally, therefore Player A is obliged to make a move, but as you see there is no way to move without a necessity of a bounce (bump). Player B wins to Player A.

The picture on the right shows 9 possible winning moves (count them carefully) in which Player B wins by scoring goal. So basically there are 3 points (crosses) which Player B wants to reach and each of them has 3 possible ways to be reached (simple)…